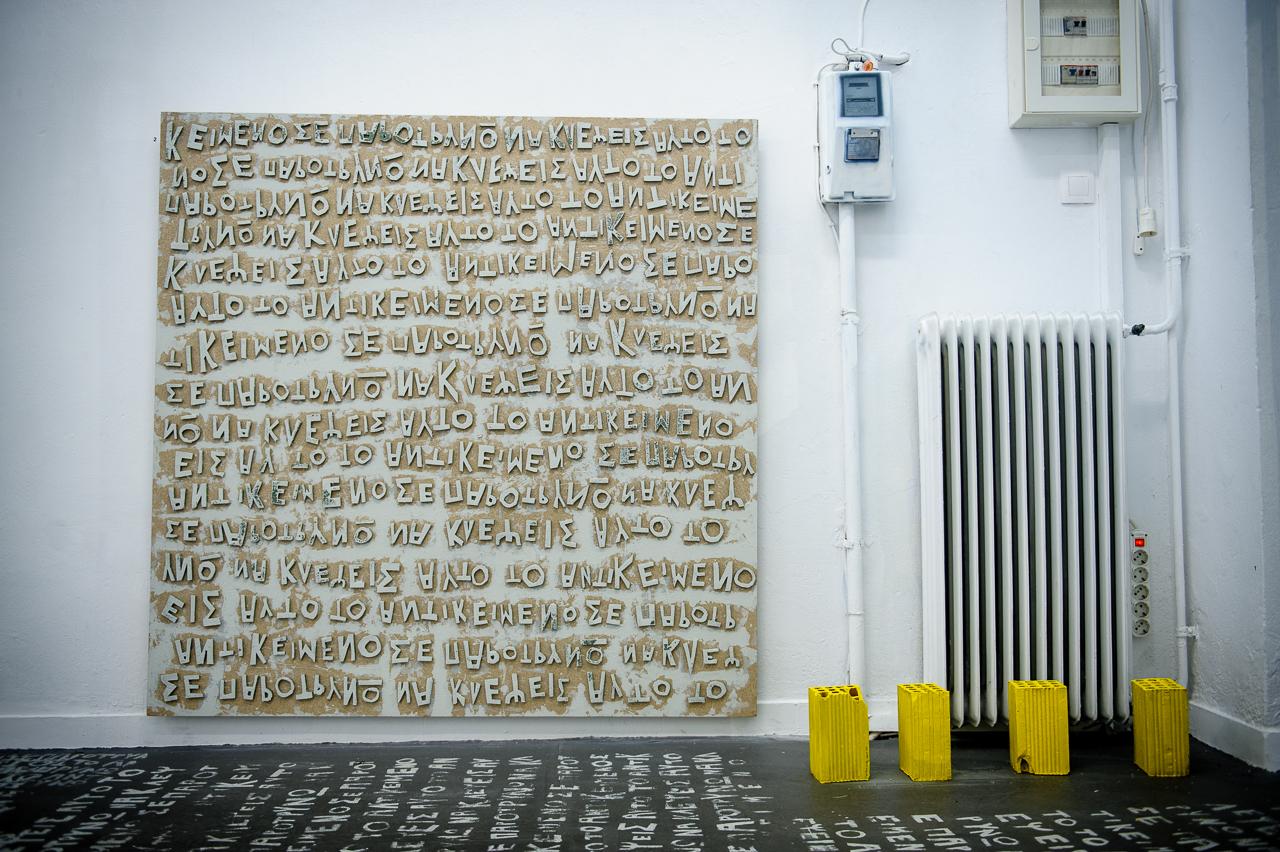 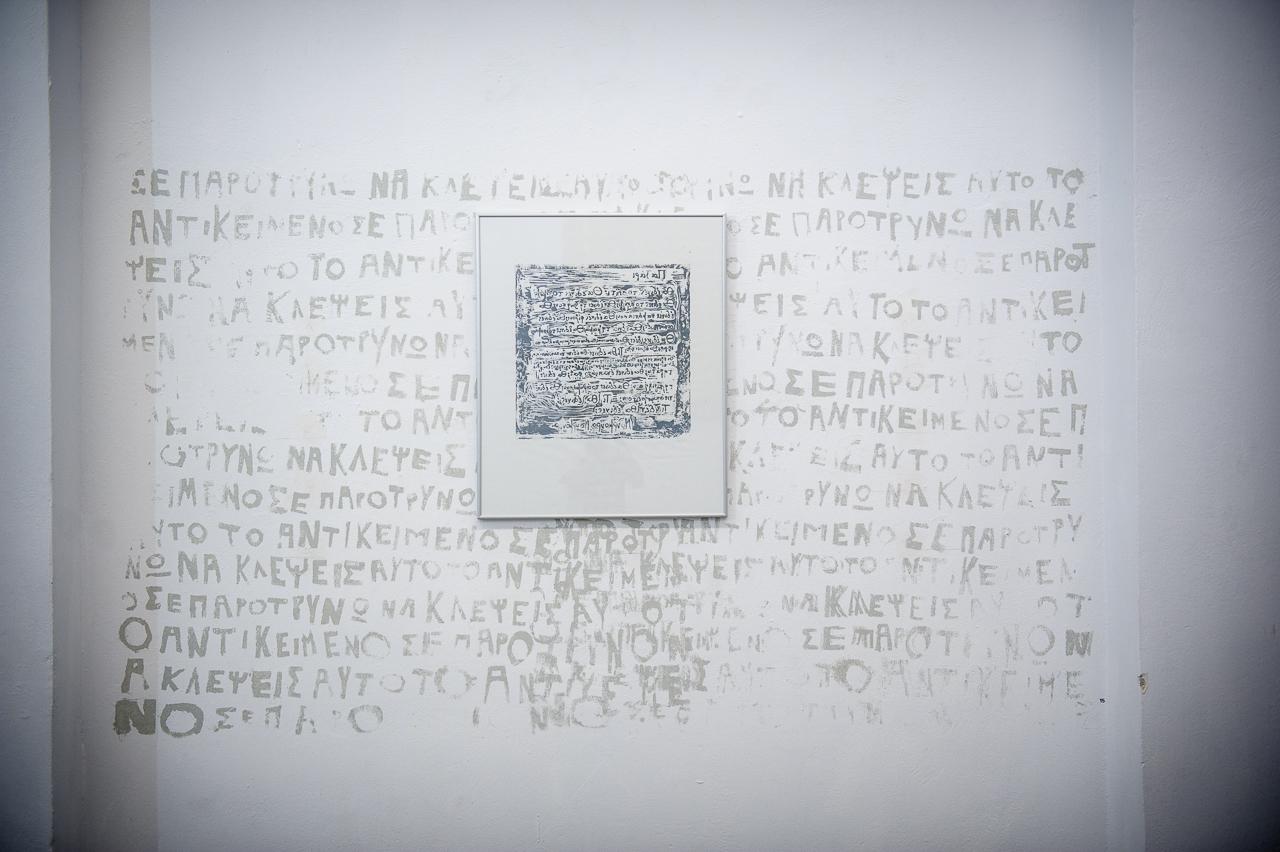 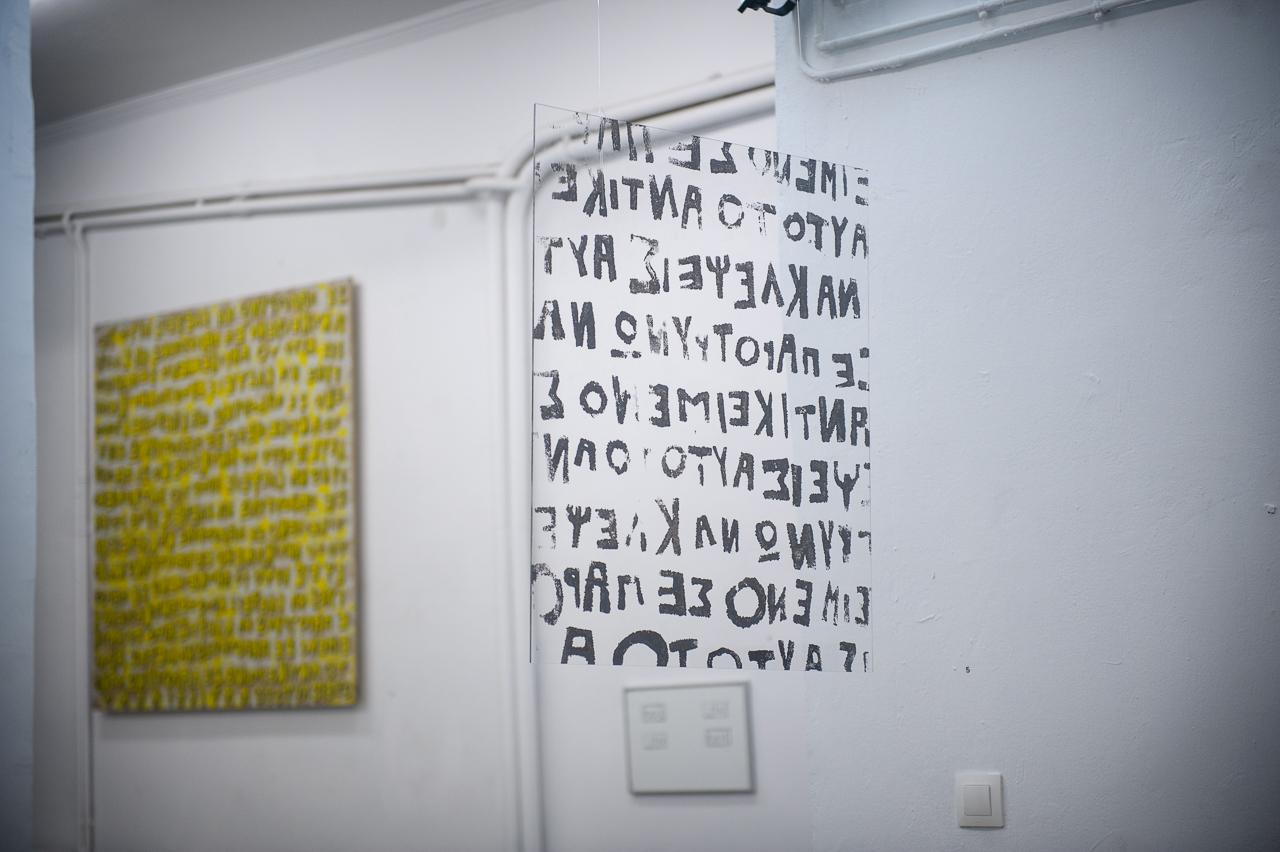 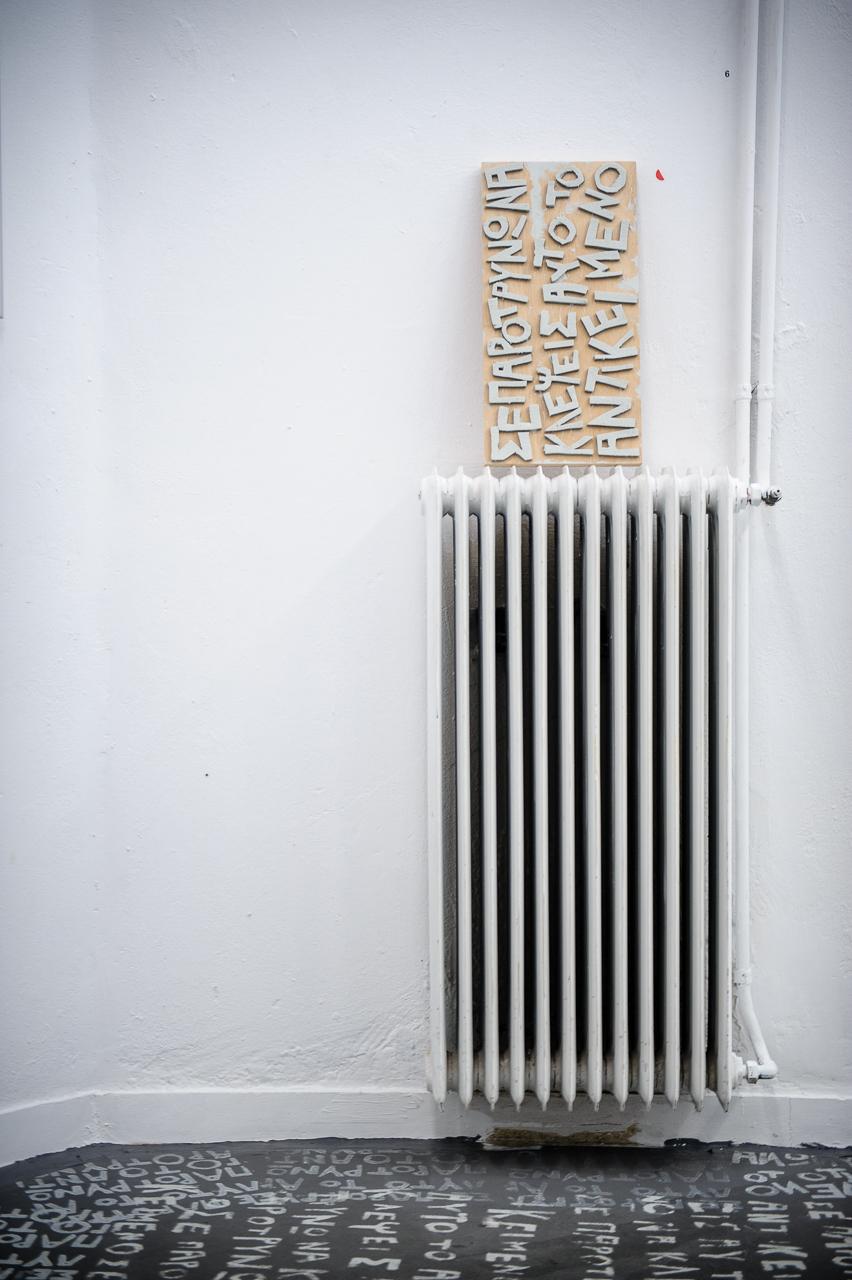 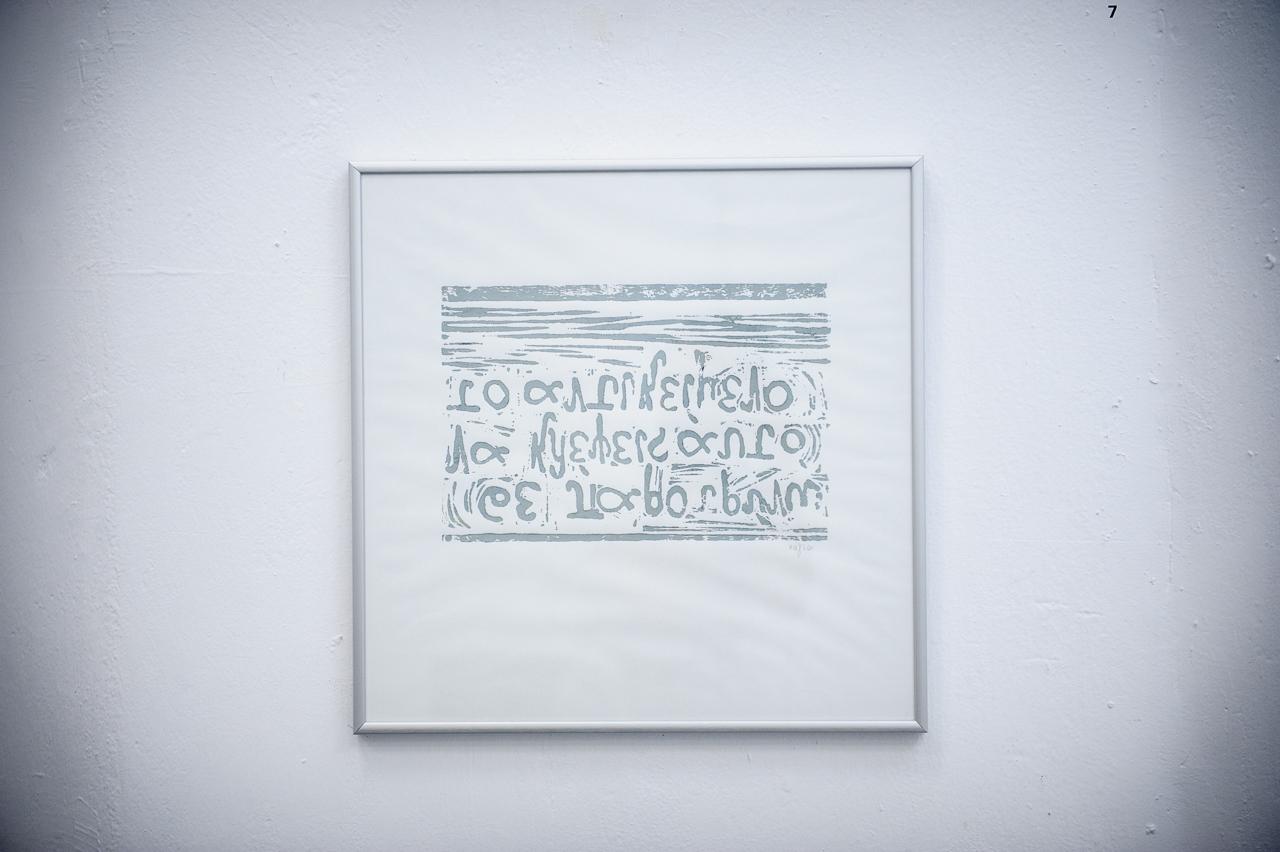 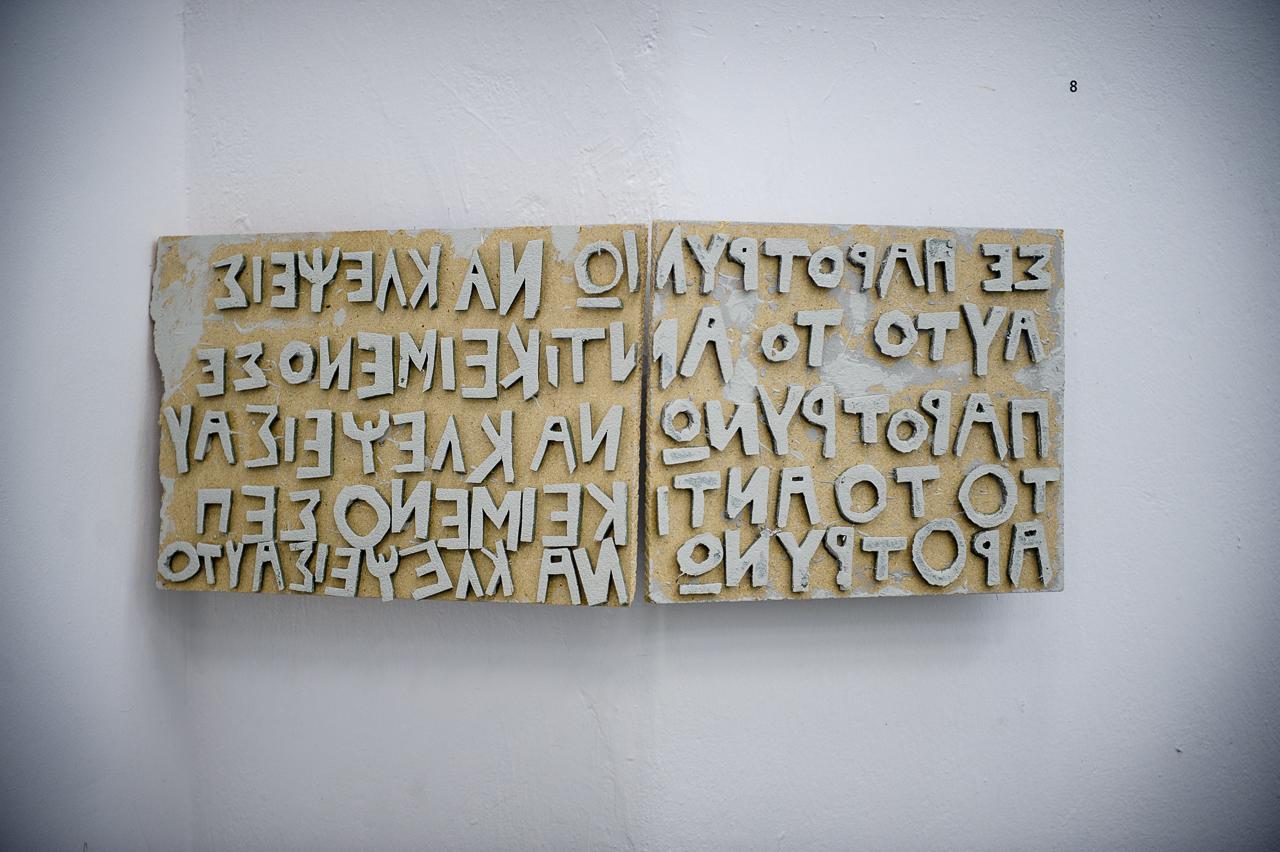 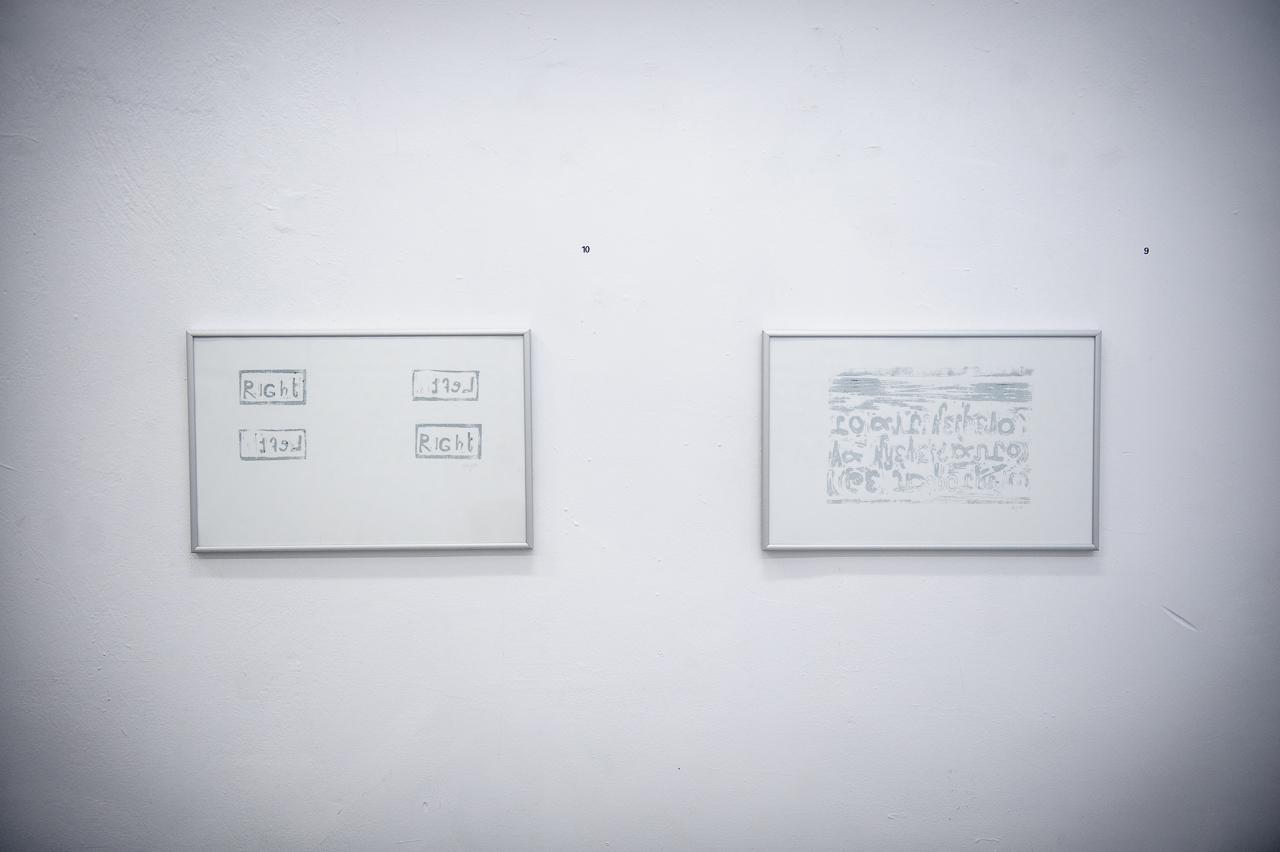 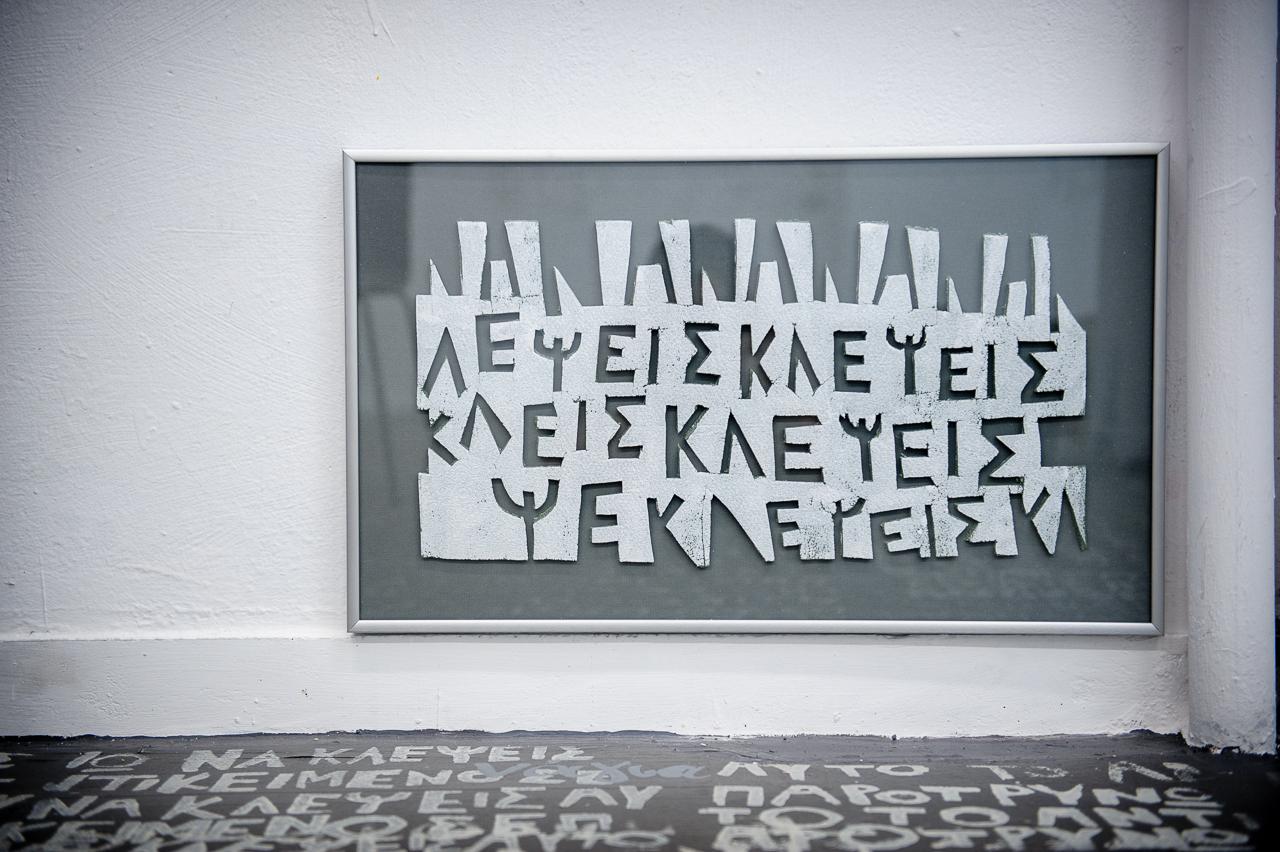 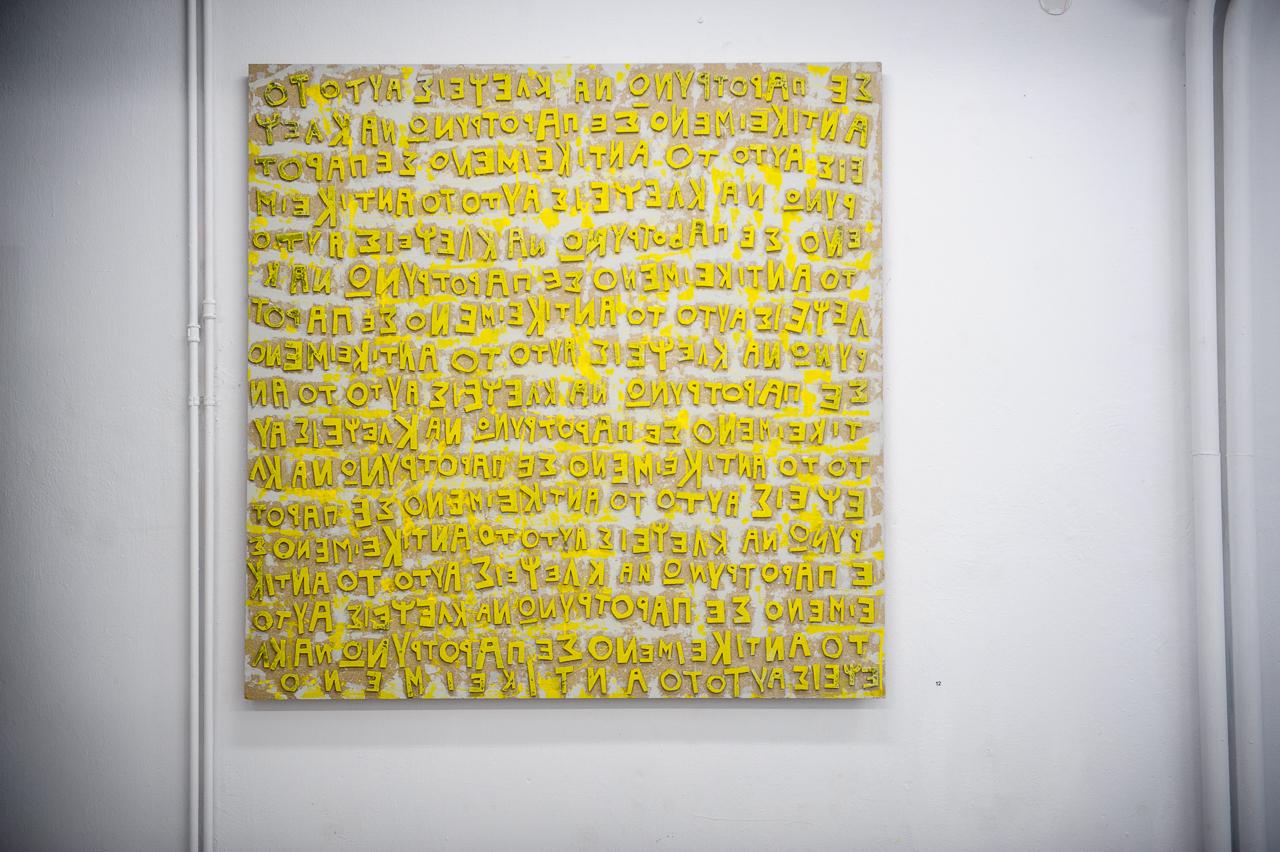 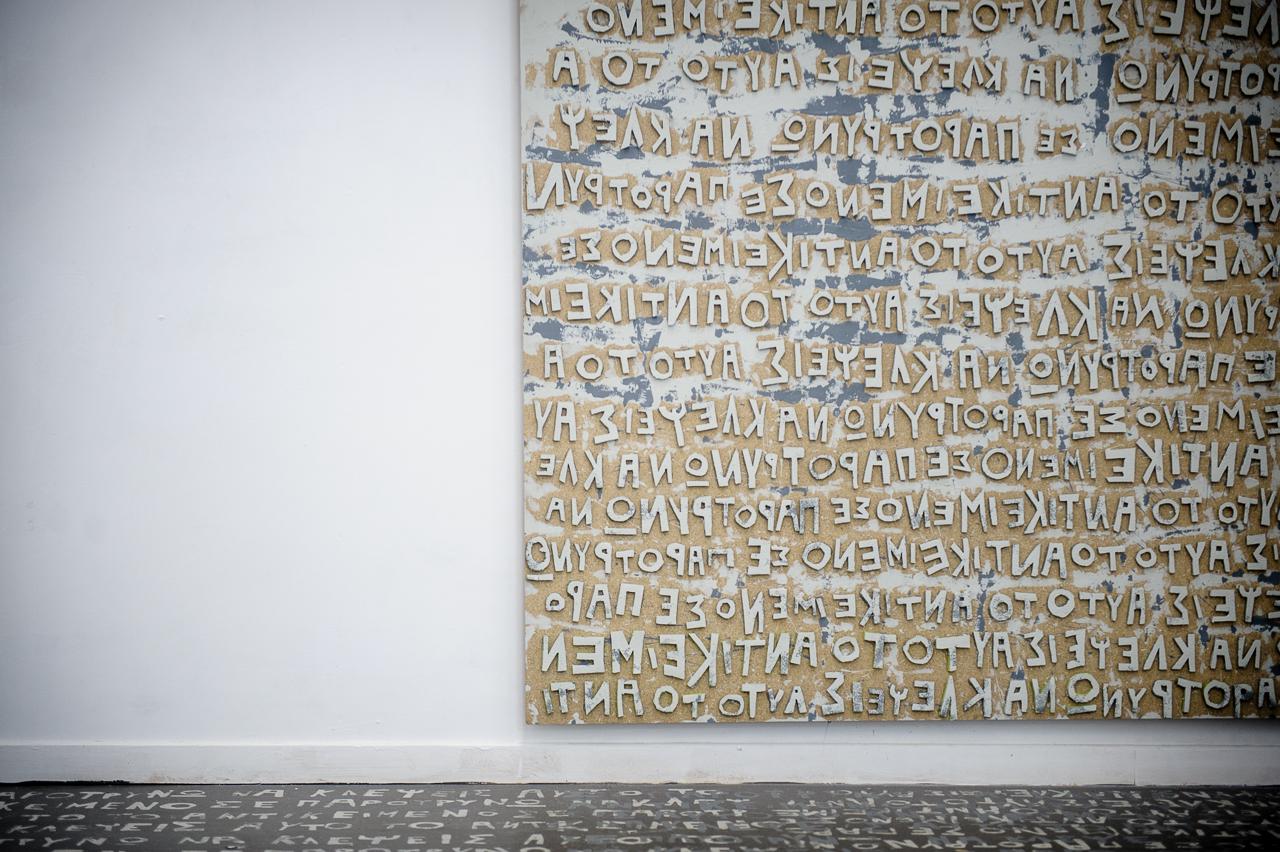 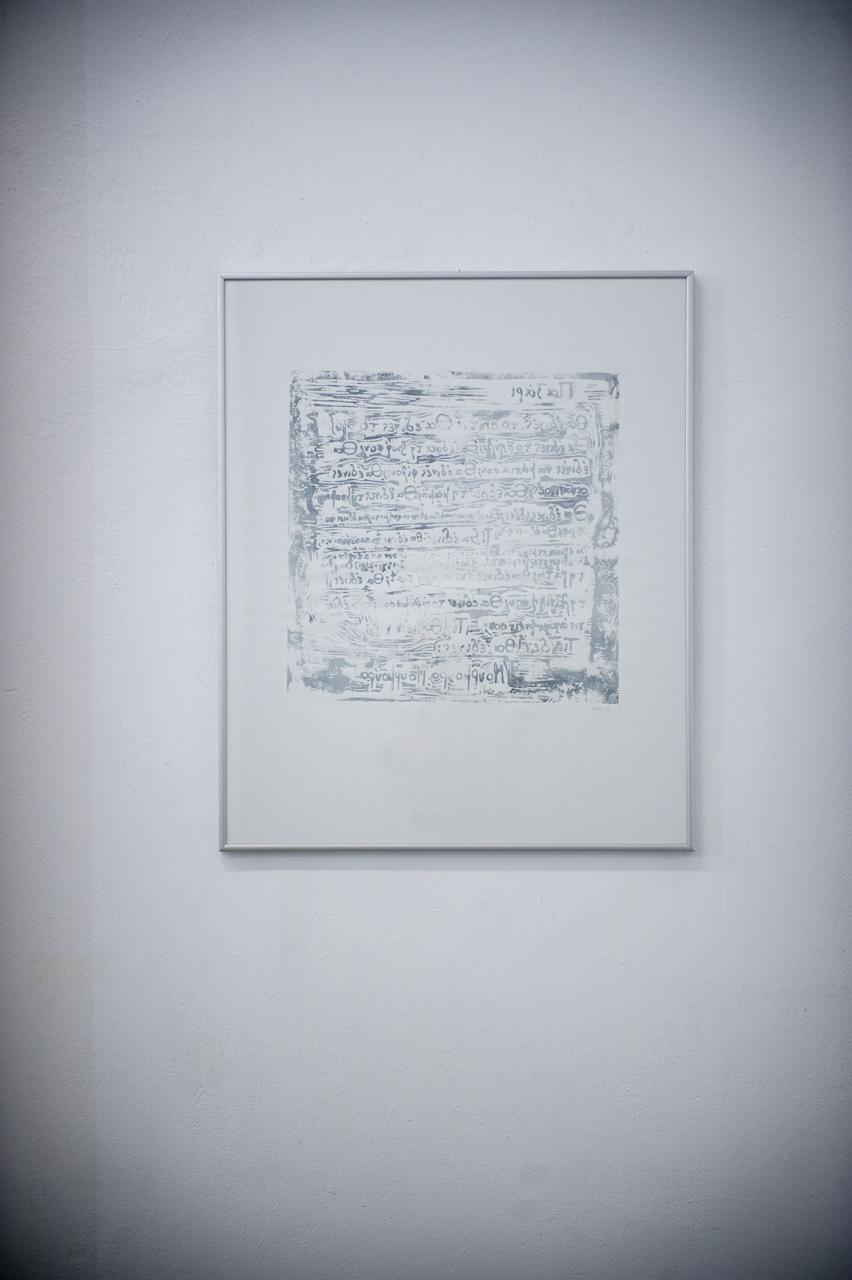 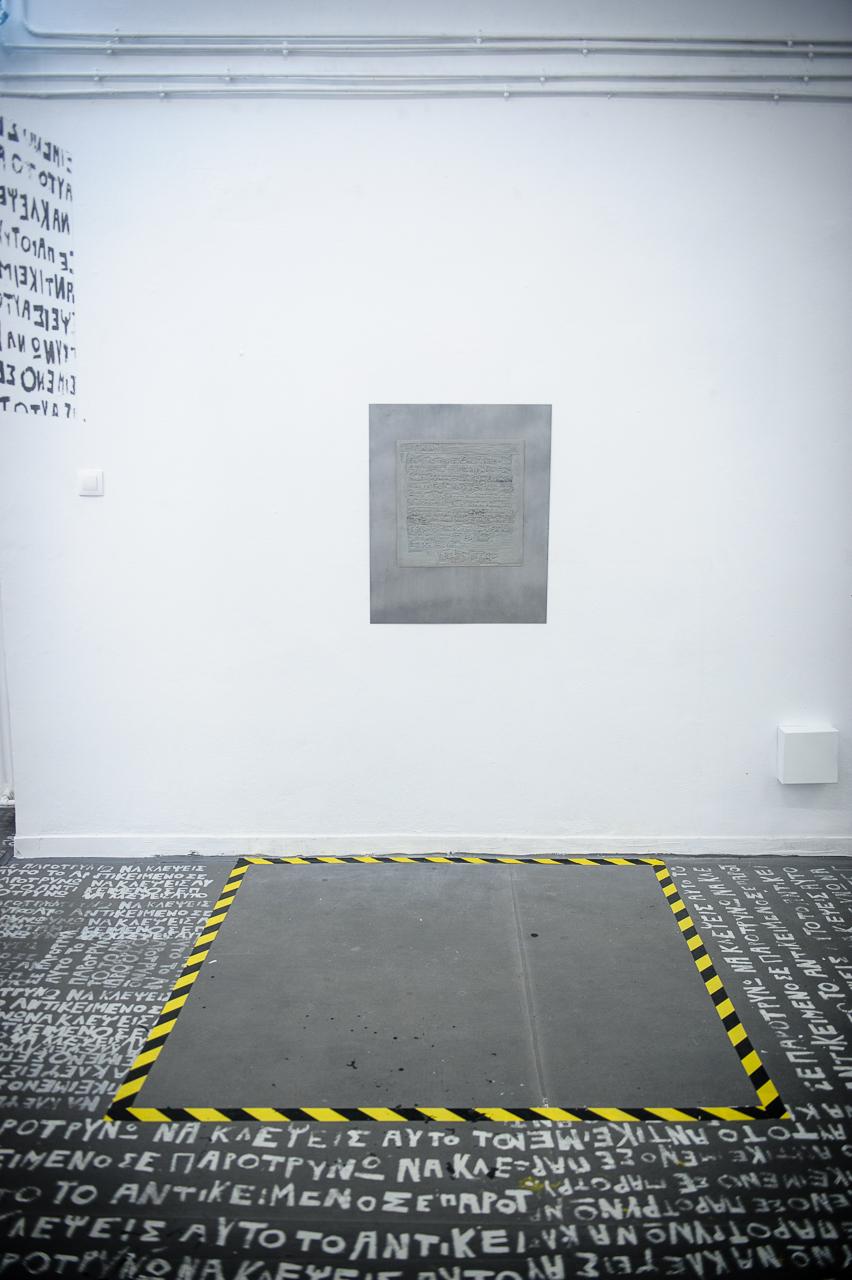 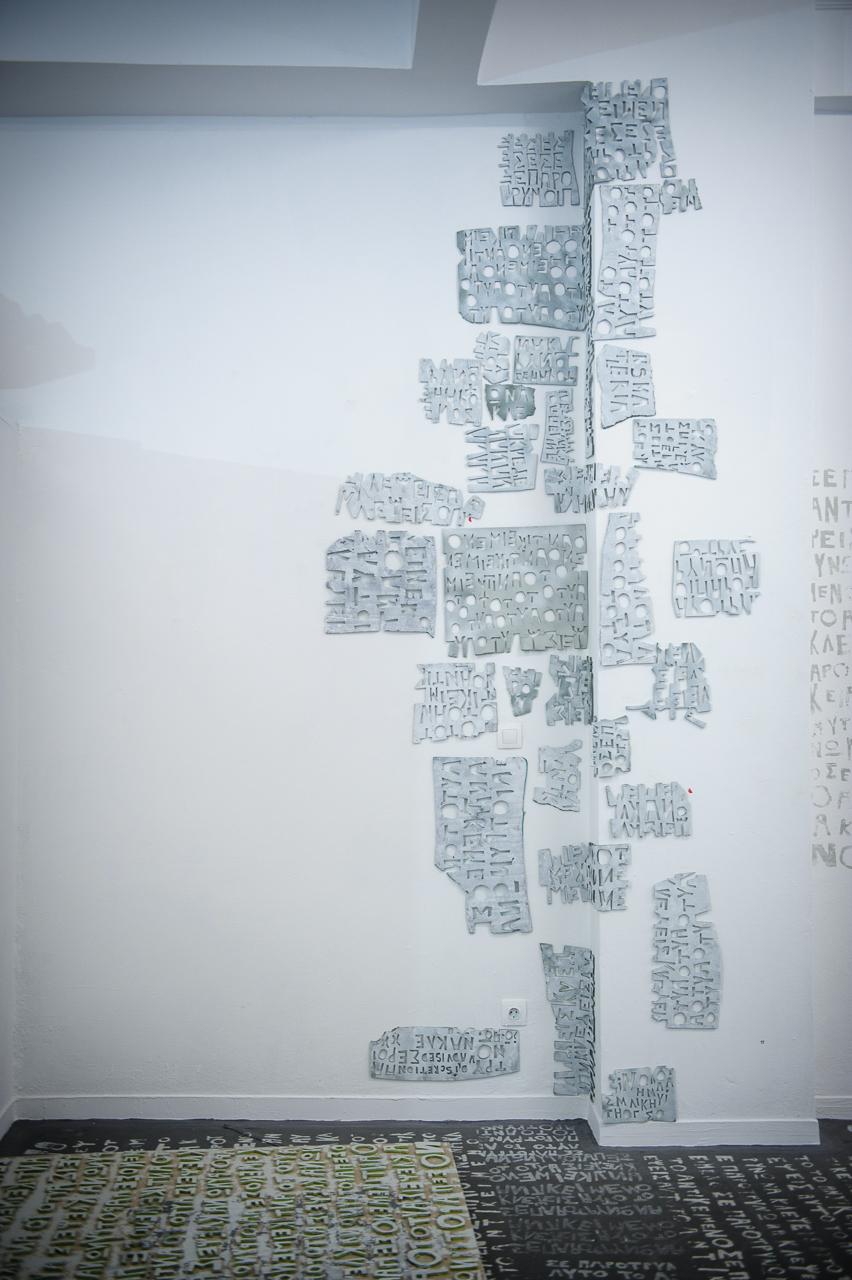 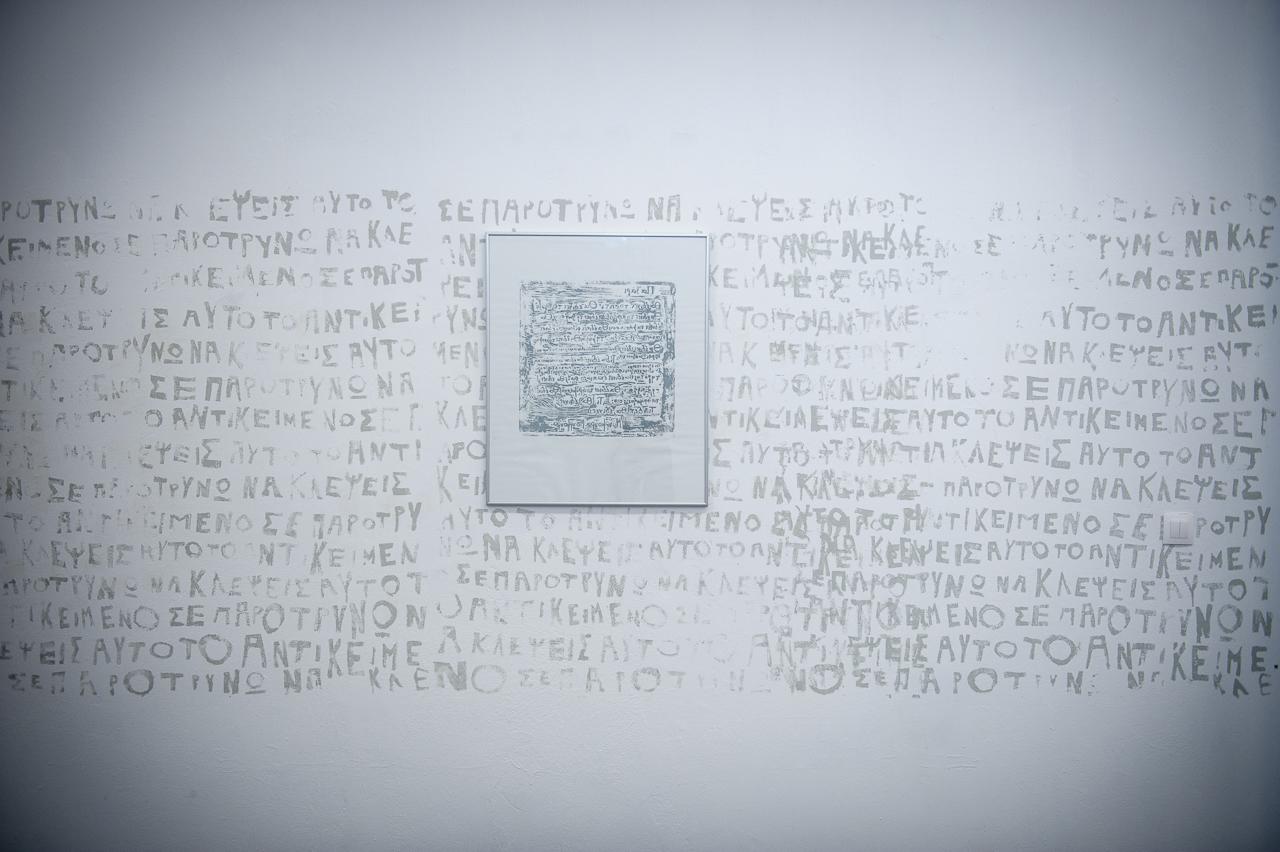 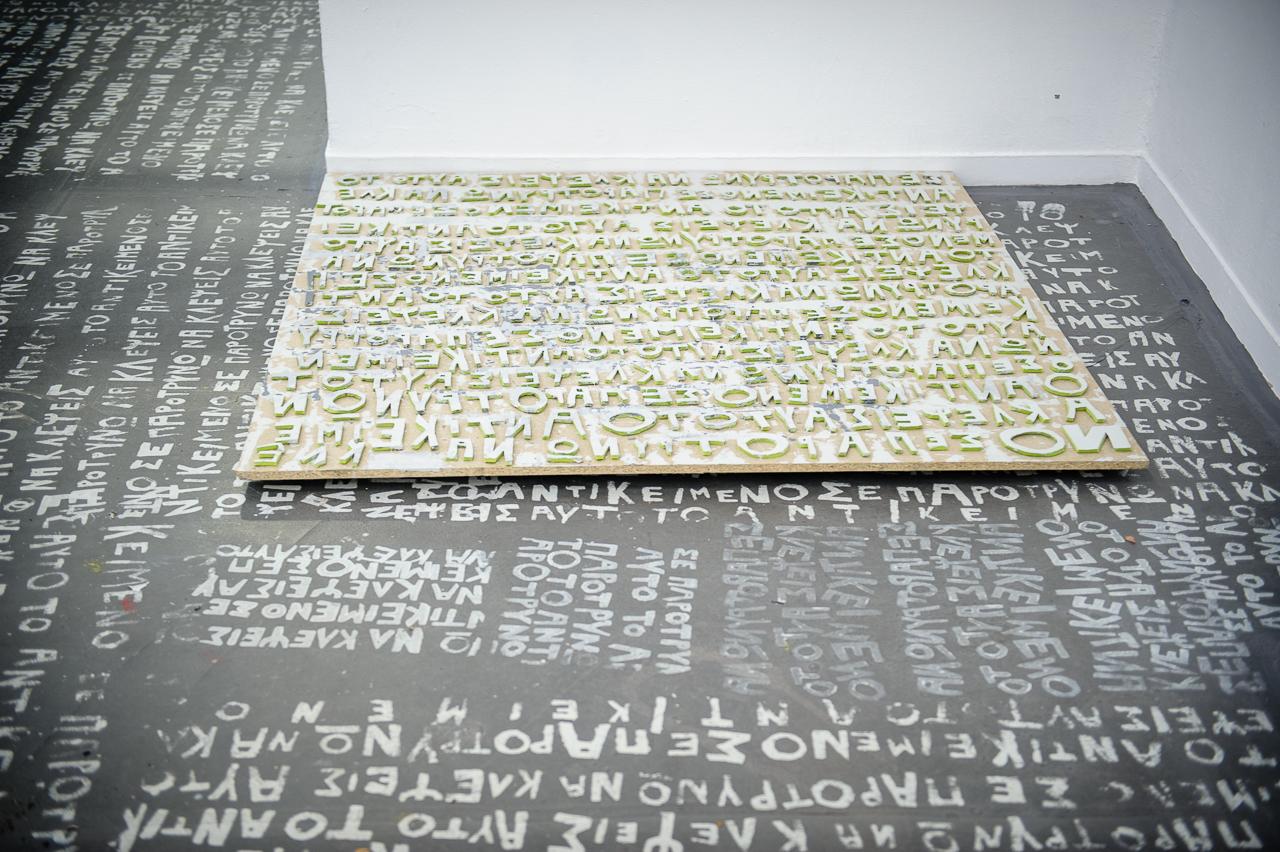 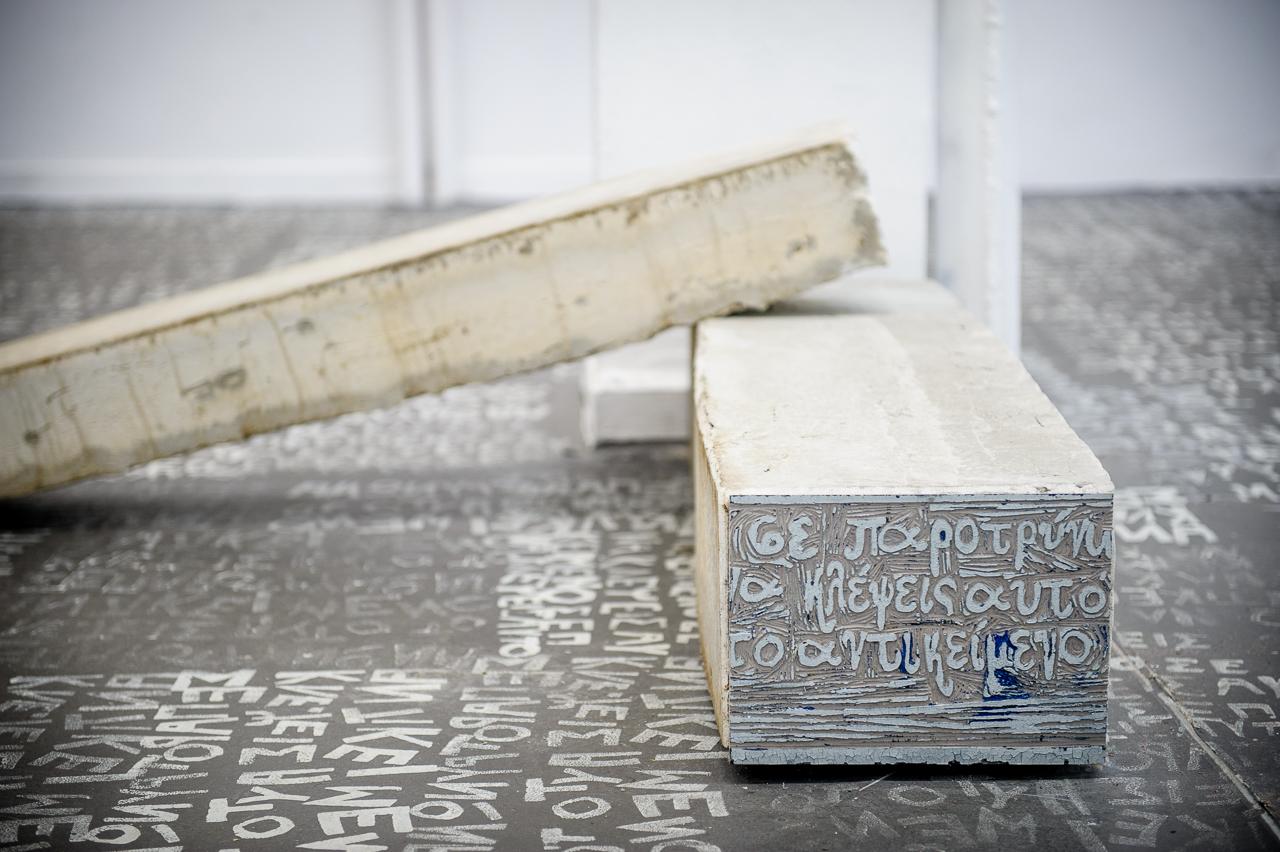 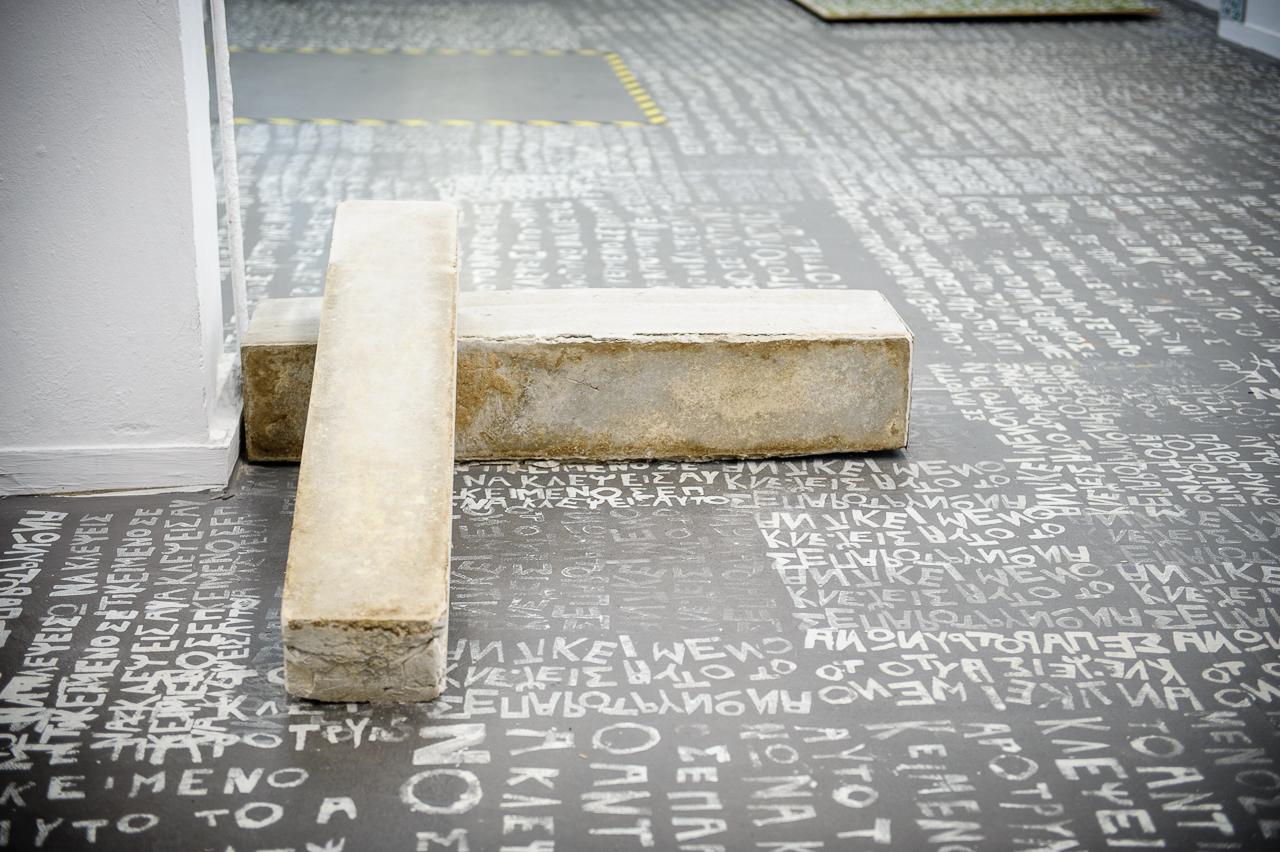 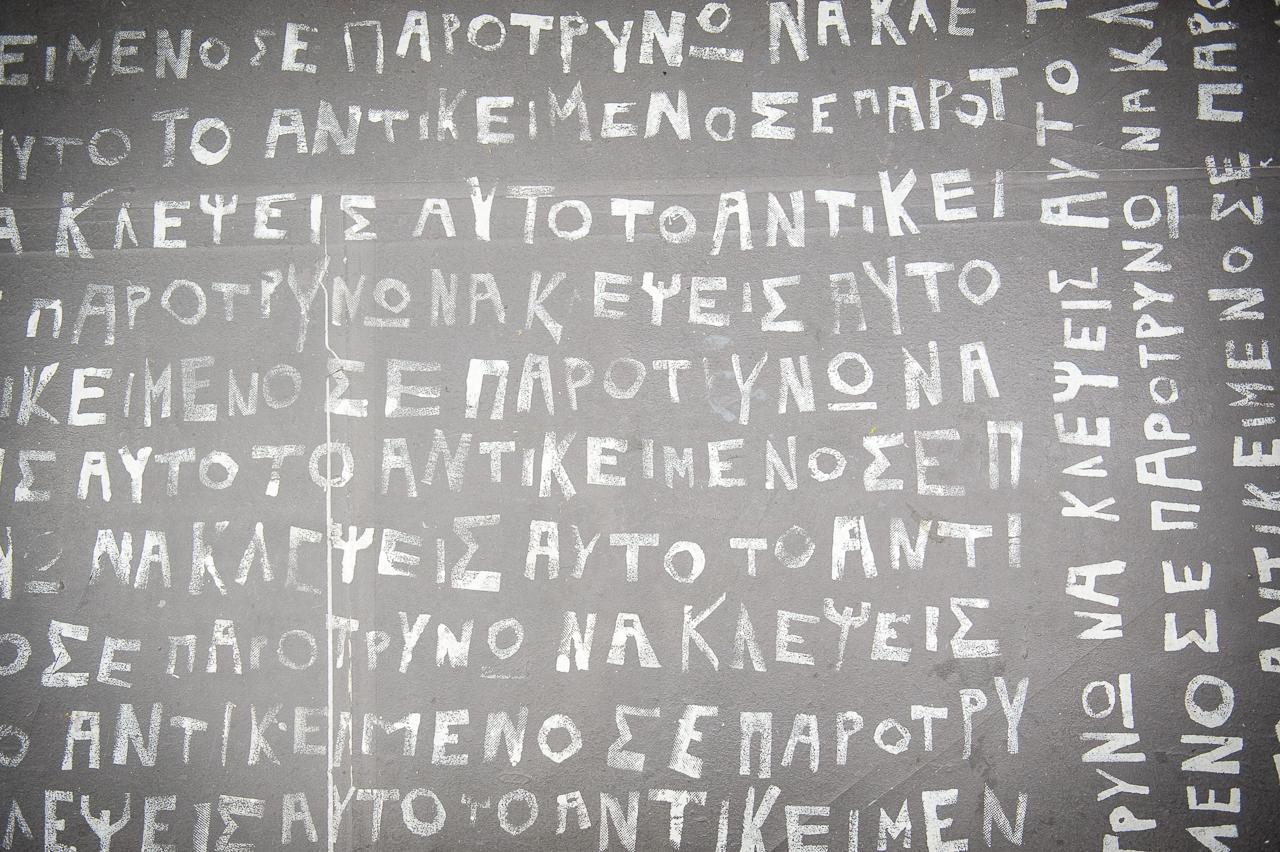 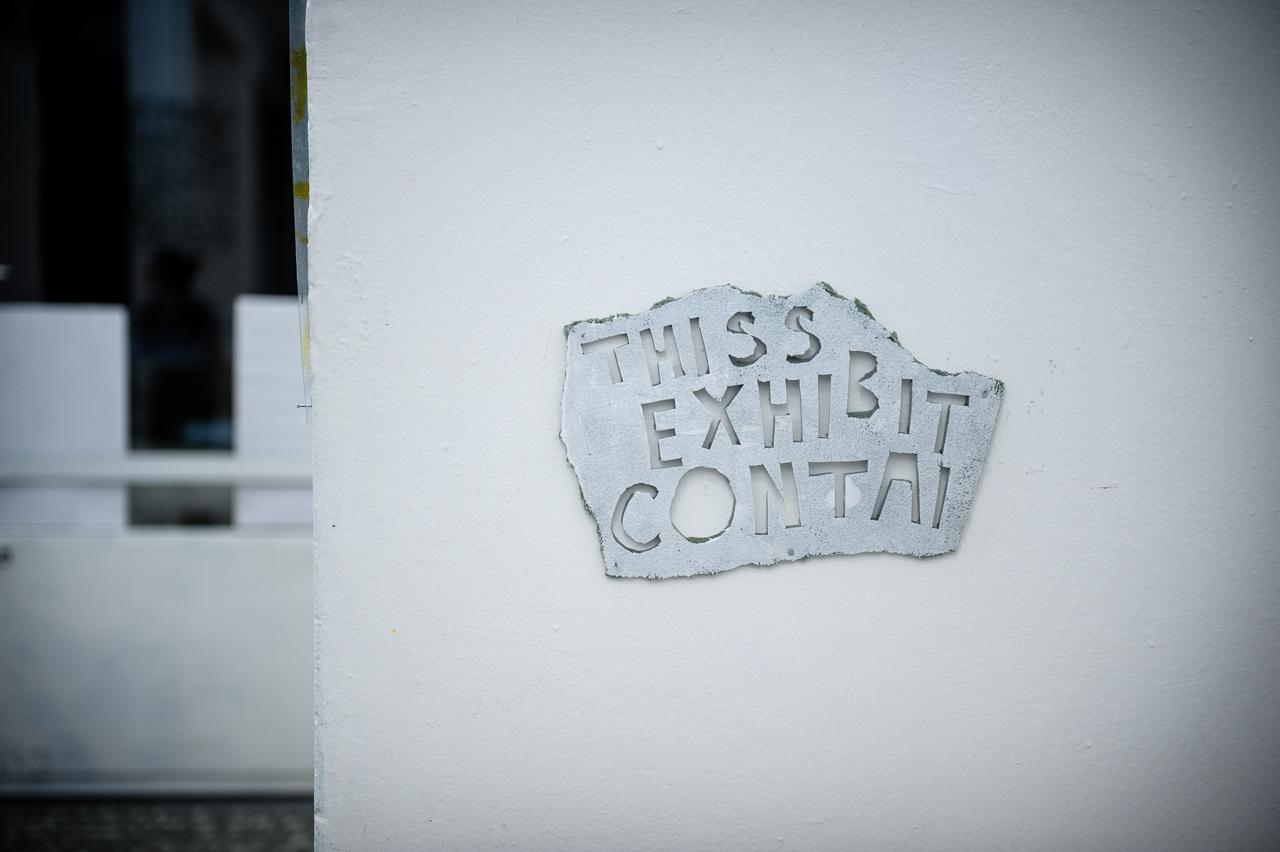 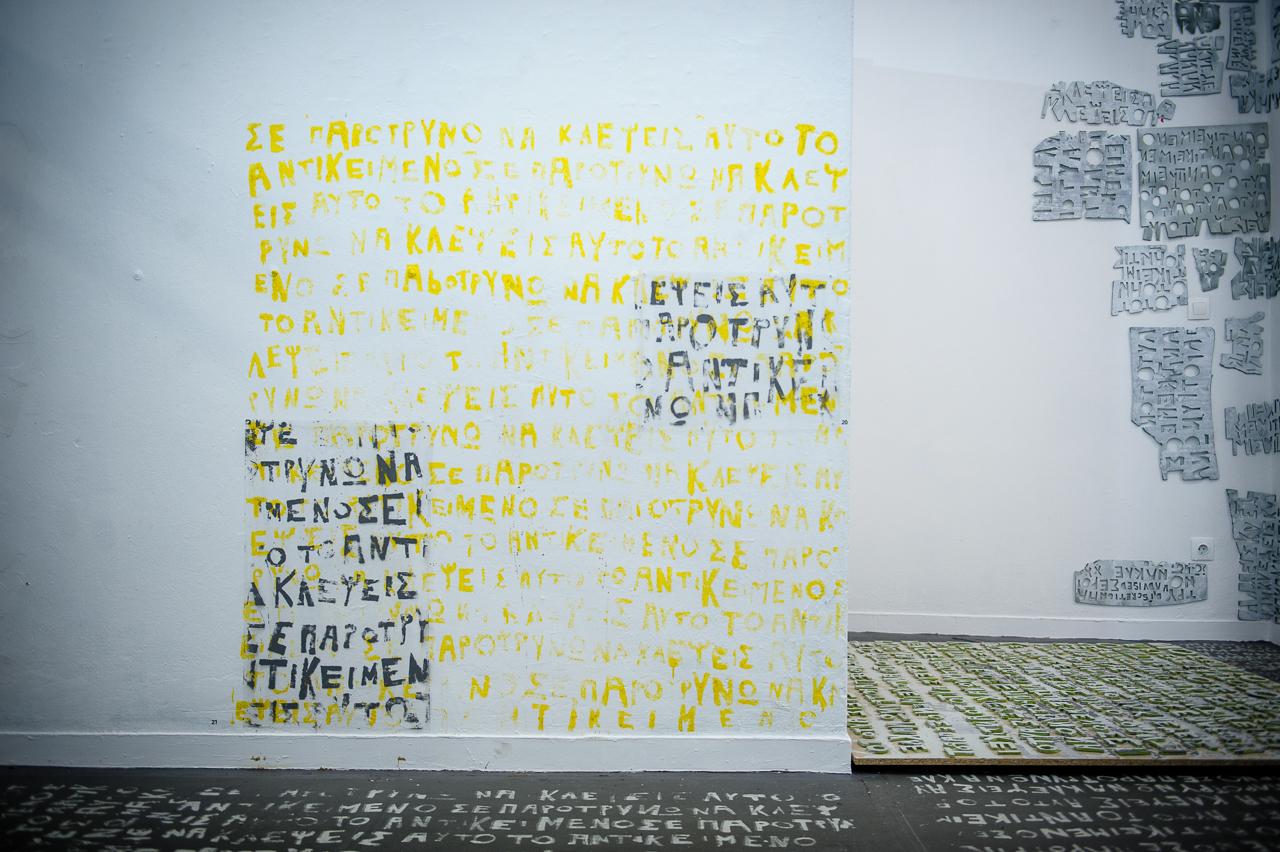 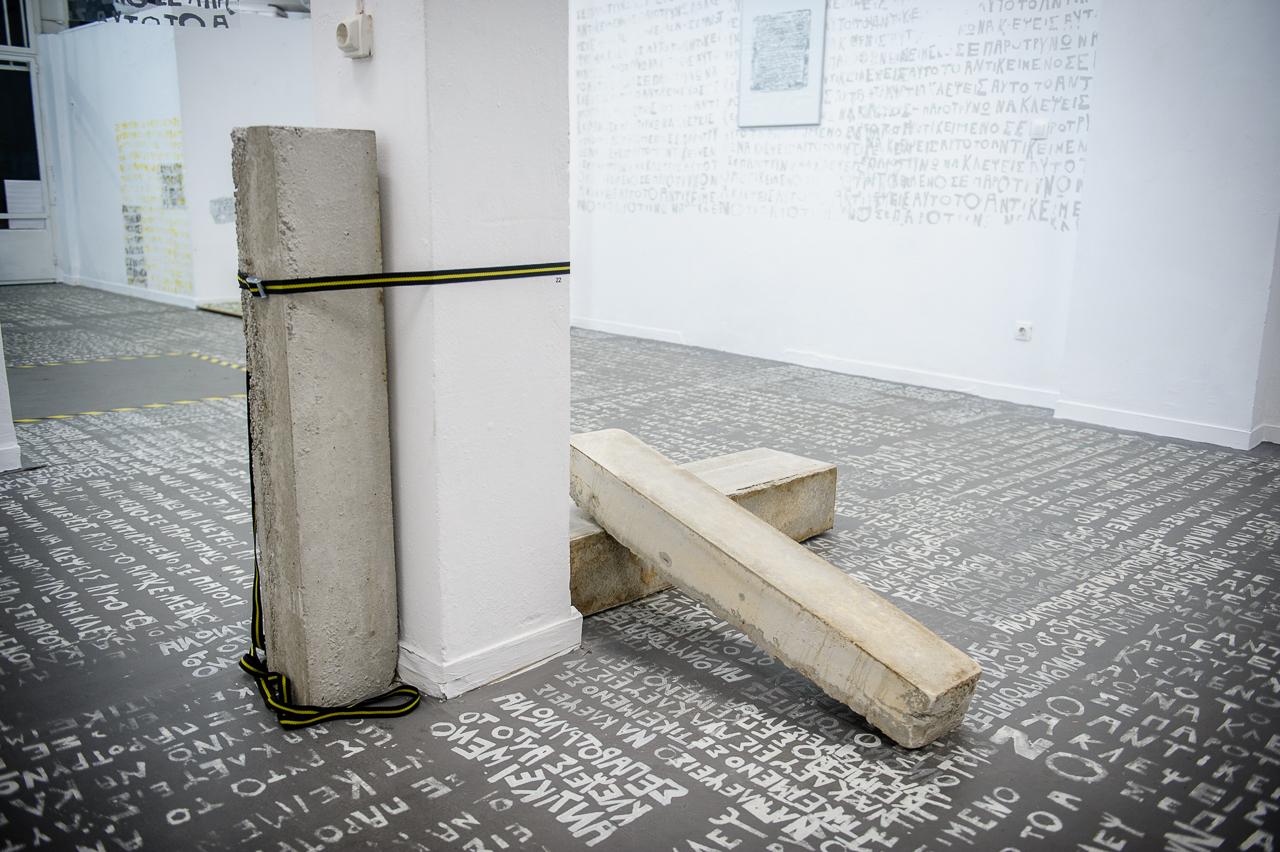 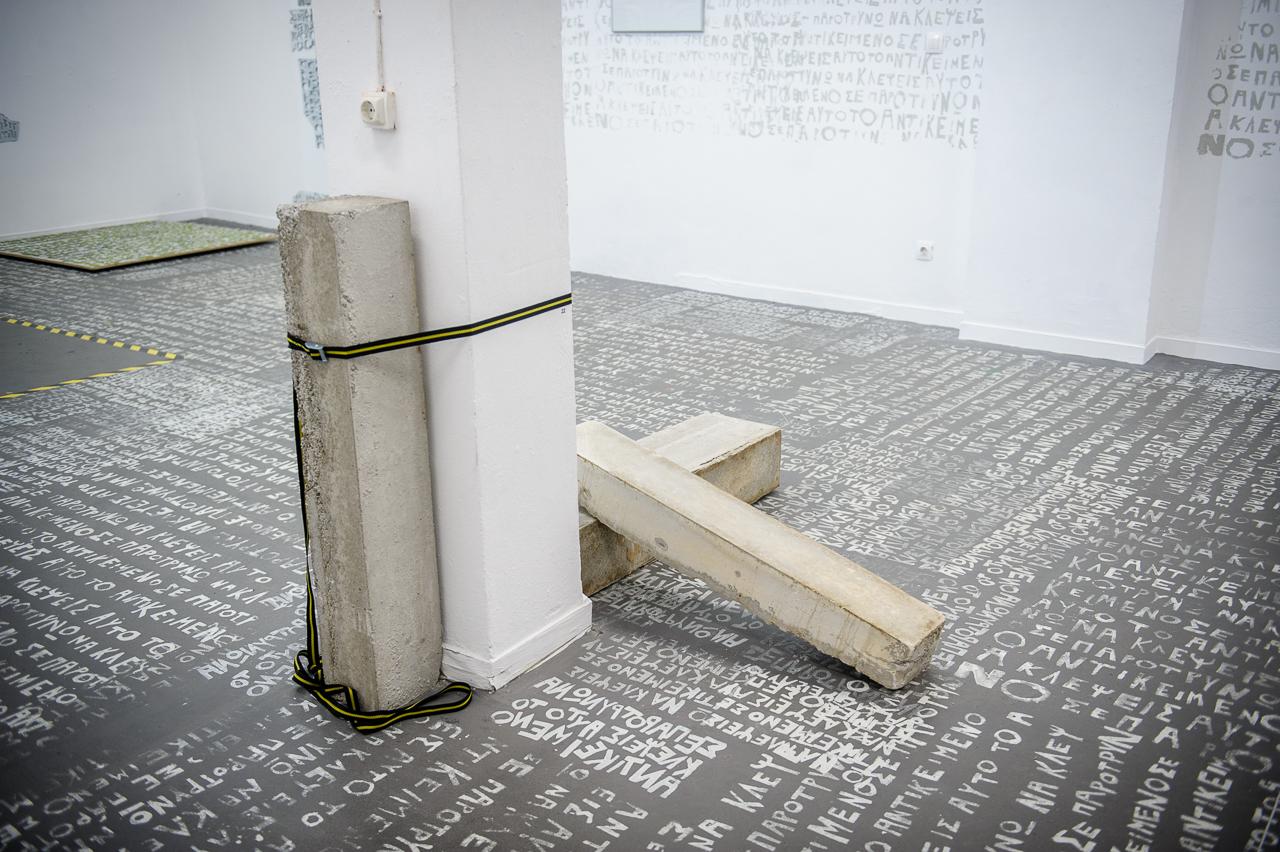 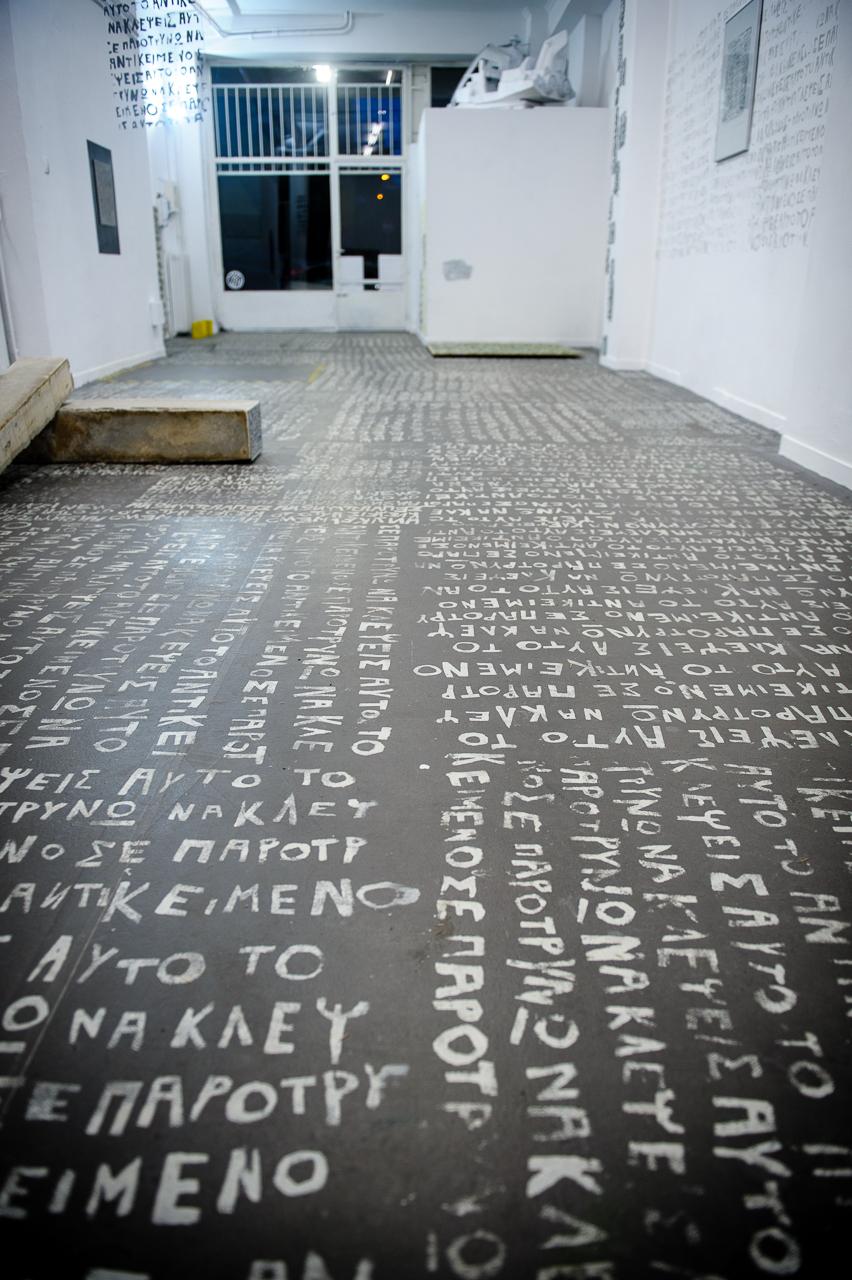 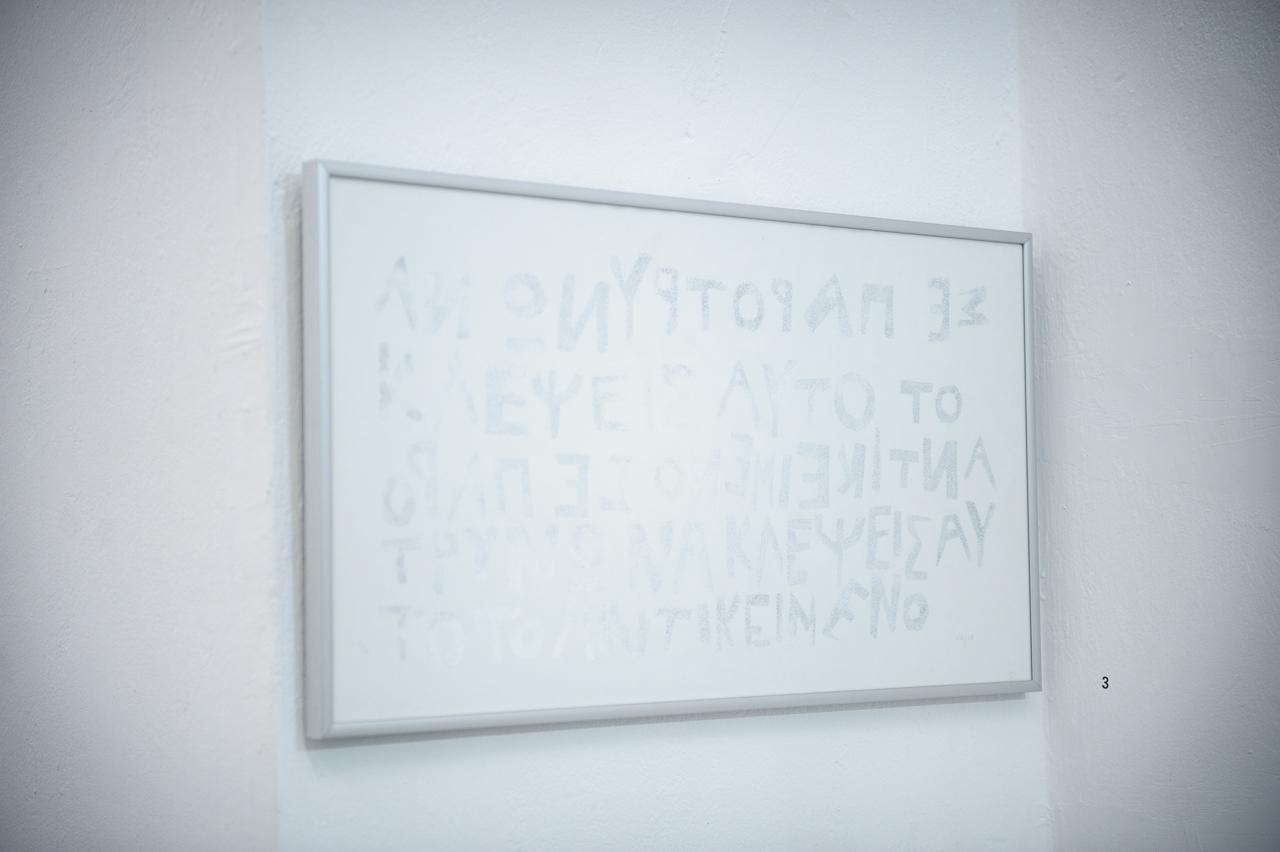 Naya Magaliou’s work has been engaged in social and cultural matters often expressed through her interest in the written word, which has become an ever-growing concern. How words are combined, framed, presented, and their impact, is essential to her practice. She structures pertinent sentences which are meticulously printed on a variety of surfaces through the use of stencils, lino cuts, and other methods. The visual and compositional elements are just as important as their linguistic nuances. Often, the visual arrangement of words and phrases are used in repetition in order to achieve a rhythmical result. She strives to create repeated patterns which carry with them a tempo; an ebb and flow, so to speak.
The Psirri area of Athens, where Alibi Gallery is located, is one of the Athenian neighborhoods where graffiti artists and taggers contribute to the changing face of the city. The artist invites the passers-by to view her work of seemingly similar characteristics to street art. It may remind one of graffiti, but its roots do not lie there. Her work is dominated by an understanding of how the urban canvas works; of issues, such as layering; ephemerality and authorship, through the use of which social gestures/acts are presented.
In this exhibition, the notion of ‘theft’ surfaces as a means of examining the issues of monetary value, not only in the art market but also in the greater cultural sphere. This is influenced in part by the book chapter: The Culture Industry: Enlightenment as Mass Deception, by Theodor Adorno and Max Horkheimer wherein it is postulated, amongst other things, that the mass production of cultural products underestimates the intelligence of audiences and endangers ‘higher art forms’. In this work, Naya chooses to question the notion of higher and lower art forms, of the more and less valuable, through the hypothesis that the largest deciding factor of ‘good art’ is theft, in one form or another.
The artist balances on a “razor’s edge” working from a space of discomfort and uncertainty, she perpetually pushes her boundaries and those of others. Her art springs from a deep internal dialogue which acquires a social and dialectic overtone, and once it is distilled, finely tuned and presented, she aims to keep her audience internally active during the viewing process and beyond.
Naya investigates the nature of ‘questions’. Can a question be so blunt it becomes uncomfortable? Dare one give a direct answer? Dare one be honest? The question, “What is an object—what makes an art object?” is also raised as the issues of value and values emerge. A tension is generated between the aesthetics of the installation and the cerebral participation, and wish of the viewer to give answers to ambiguous questions posed.
Though “Notes” is a site specific, and ephemeral exhibit, it is solid in the concept, unity and rhythm of its components.